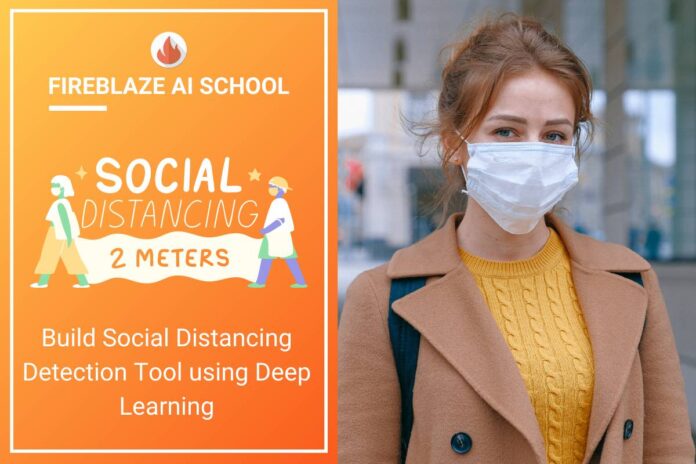 In this article we are going to discuss how to Build Social Distancing Detection Tool using Deep Learning, Social distancing also called “Physical distancing” means to keep safe space distance between yourself and another human being. Is a set of non-pharmaceutical interventions or measure intended to prevent the spread of a contagious disease by maintaining a physical distance.

Social distancing should be practiced in combination with others to reduce the spread of COVID-19. As per the WHO(World Health Organization), COVID-19 has far infected almost 10 million people and claimed over 8 million lives globally. Almost 213 countries have been affected so far by this virus.

COVID-19 spread mainly among people who are in close contact (at least about 6 feet) for a prolonged period. Spread happens when an infected person coughs, sneezes, or talks, and droplets from their mouth or nose are launched into the air and land in the mouths.

Let’s build a tool that can potentially detect where each person is in real-time, and return a bounding box that turns red if the distance between two people is close.

This can be used by governments to analyze the movement of people and alert them if the situation turns serious.

This article will cover the confusion of these points.

The fundamental difference between these two tasks is that image classification identifies an object in an image whereas object detection identifies the object as well as its location in an image. Here’s a classic example to understand this difference:

Object detection and tracking both terms are similar. Both tasks involve identifying the object and its location.

But, the only difference between them is the type of data that you are using. Object Detection deals with images whereas Object Tracking deals with videos.

Object Detection applied on each and every frame of a video turns into an Object Tracking problem.

As a video is a collection of fast-moving frames, Object Tracking identifies an object and its location from each and every frame of a video.

Object Detection is one of the most challenging problems in computer vision. Having said that, there has been an immense improvement over the past 20 years in this field.

A very simple approach to building an Object Detection model is through a sliding window for Build Social Distancing Detection Tool using Deep Learning . As the name suggests, an image is divided into regions of a particular size and then every region is classified into the respective classes. This model work on CNN algorithm.

For detail about CNN

This method is really simple and efficient. But it’s a time-consuming process as it considers the huge number of regions for classification. And numbers of the matrix there mean pixel size.

Now, we will see how we can reduce the number of regions for classification in the next approach.

R-CNN stands for Region-based Convolutional Neural Network. It uses one of the external region proposal algorithms to select the region of interest (ROI).

So, now develop a less time-consuming task. Is it possible?

Yes, it is happening in a real situation, this process of extracting the regions that are likely to contain the object is known as Region Proposals.

Many Region Proposal algorithms have been proposed to select a Region of Interest (ROI). Some of the popular ones are objectness, selective search, category-independent object proposals, etc. So, R-CNN was proposed with an idea of using the exterior region proposal algorithm.

The predicted regions can be overlapping and varying in size as well. So, Maximum Non Suppression is used to ignore the bounding boxes depending upon the Intersection Over Union (IOU) score:

For example, if an image has 2000 regions of proposals, then the number of forwarding passes to the CNN is around 2000. This inevitably led to another model architecture known as Fast R-CNN.


In order to reduce the inference speed, a slight change in the R-CNN workflow was made and proposed, known as Fast R-CNN. The modification was done in the feature extraction of region proposals.

During inference, Fast R-CNN consumes nearly 2 seconds for each test image and is about 25 times faster than R-CNN. The reason being the change in the feature extraction of ROI. For example, if an image has a 2000 region of proposals, then the number of forwarding passes to CNN is around 1.

Can we still bring down the inference speed? Yes! It’s possible. This led to Faster R-CNN, a SOTA model for object detection tasks.

Faster R-CNN replaces the exterior region proposal algorithm with a Region Proposal Network (RPN). RPN learns to propose the region of interest which in turn saves a lot of time and computation as compared to a Fast R-CNN.

Social Distance is the application to prevent the spread of COVID-19. This concept was launched by Andrew Ng’s.

Detectron 2 is an open-source library for object detection and segmentation created by the Facebook AI Research team, popularly known as FAIR. Detectron 2 implements state of the art architectures like Faster R CNN, Mask R CNN, and RetinaNet for solving different computer vision tasks, such as:

The baseline models of Faster R-CNN and Mask R-CNN are available with 3 different backbone combinations. Please refer to this Detectron-2 GitHub repository for additional details.

Download the pre-trained model for object detection from Detectron 2’s model zoo and then the model is ready for inference: 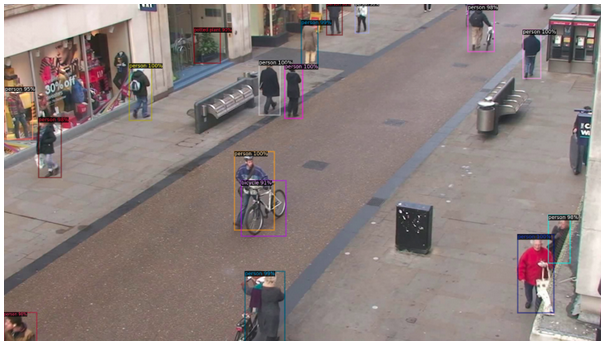 As you can see here, multiple objects are present in an image, like a person, bicycle, and so on. We are well on our way to building the social distancing detection tool!

Next, understand the objects present in an image:

Have a glance at the bounding boxes of an object:

As different objects(peoples) are present in an image, let’s identify classes and bounding boxes related to only the people:

Calculate the distance the bottom center for every bounding box and draw the points on the image: 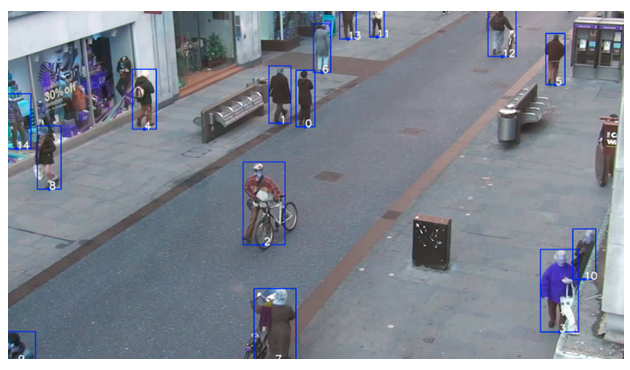 Create a function the Euclidean distance between every two points in an image:

Create a function that returns the closest people based on the given distance. Here, proximity distance refers to the minimum distance between two people: 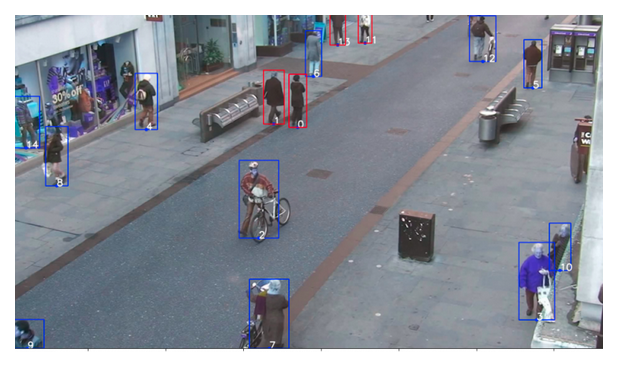 Now, we have seen all procedures step by step how to apply object detection using Detectron-2, calculate the distance between every pair of people, and then finally identify the closest people. We will carry out similar steps on each and every frame of the video now:

Identify the closest people in each frame and change the color to red:

After identifying the closest people in each frame, convert the frames back to a video. It’s done.

#inserting the frames into an image array

# writing to a image array