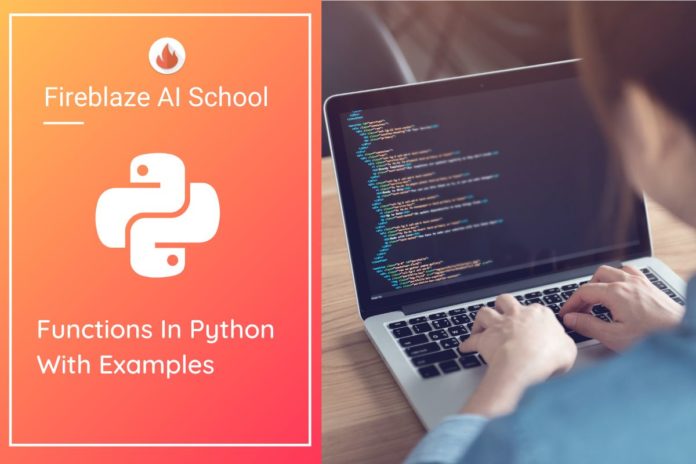 What Are Functions In Python?

A function is a block of code that performs a specific task and runs only when it is called.  Functions generally take in the data, process it, and return a result. Python provides various built-in functions like print(), etc. Like, other programming languages here also we can create our own functions, these functions are called user-defined functions.

Why do we Write Functions?

Basic Syntax for Functions in Python

How To Create a Functions?

In Python Programming language we define a function by using the def keyword.
Example:


How to Call Functions?

To call a function in Python, use the function name followed by a parenthesis.
Example:

Information can be passed to functions as parameter. Parameters are written after the function name, inside the parenthesis. One can add as many parameters as you want, just separate them with a comma(,).

The following below example has a function with one parameter (fname). When the function is called, we pass along a string, which completes the whole word.

You can send any data types of the parameter to a function (string, number, list, dictionary etc.), and it will be treated as the same data type inside the function.
E.g. when we send a list as a parameter, it will still be a List when it reaches the function.

When we want a function to return a value, we use the return statement.
Example:

In Python, you can also send arguments with the key = value syntax.
Here the order of the arguments does not matter.
Example:

In the case when you do not know how many arguments that will be passed into your function, add a * before the parameter name in the function definition.

Here the function will receive a tuple of arguments and can access the items accordingly
Example:

As in other programming languages, Python also accepts function recursion, which means a defined function can call itself.

Recursion is a common mathematical and programming concept which means that a function calls itself. This has the meaning that you can loop through data to reach a result.
The developer must be very careful with recursion as it can be quite easy to commit mistake in writing a function which never terminates i.e., making it an infinite loop, also which can uses excess amounts of memory or processor power.

However, when written correctly recursions can be a very useful approach to programming.
Example: