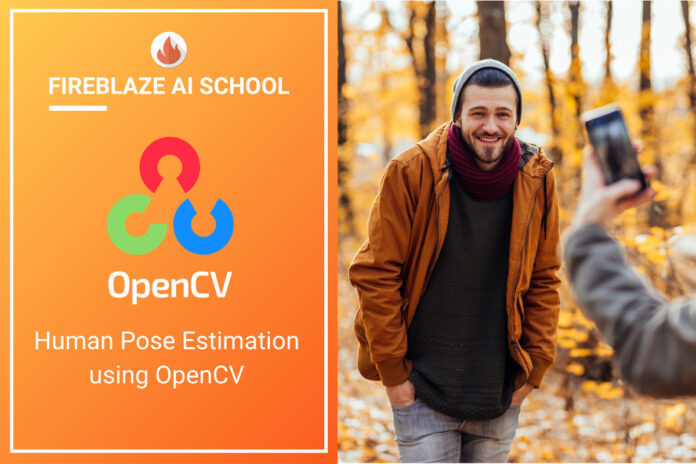 In This article, we will discuss how to use a Deep learning network model for Human Pose Estimation using OpenCV. For this task we used the pre-trained model name Caffe model that won the COCO keypoints challenge in 2016 in our own application.

NOTE : You will need OpenCV version 4.1.2 and above to run the code.

In computer vision where we detect the position and orientation of an object. This means detecting keypoints location of particular objects.

For example, in the problem of face pose estimation(i.e. Facial landmark detection ), this means we detect a human face.

A related problem is Head pose estimation where we use the facial landmarks to obtain the 3D orientation of a human head with respect to the camera.

In this article, we will work on Human Pose Estimation using OpenCV, where to detect and localize the major parts of the body like joint, shoulder, knee, wrist, etc.

This article, we will solve a simpler problem of detecting keypoints on the body.

Now such a type of suit is ever built, it would require human pose estimation!

Some of the datasets are :

This article is based on a Multi-Person Pose Estimation by the Perceptual Computing Lab at Carnegie Mellon University.

Let’s briefly go over the architecture before we explain how to use the pre-trained model.

The model takes as input a color image of size w × h and produces, as output, the 2D locations of keypoints for each person in the image. The detection takes place in three stages :

The authors of the paper have shared two models – one is trained on the Multi-Person Dataset ( MPII ) and the other is trained on the COCO dataset. The COCO model produces 18 points, while the MPII model outputs 15 points. The output plotted on a person is shown in the image below.

In this article use the COCO Dataset.

In this section, we will see how to load the trained models in OpenCV and check the outputs. We will discuss code for only single person pose estimation to keep things simple. These outputs can be used to find the pose for every person in a frame if multiple people are present.

There are separate files for Image and Video inputs.

Future Work: We will cover the multiple-person case in a future post.

Use the getModels.sh file provided with the code to download all the model weights to the respective folders. Note that the configuration proto files are already present in the folders.

From the command line, execute the following from the downloaded folder.

We will use these two files to load the network into memory.

Step 3: Read the image and Prepare Input to the network

The input frame that we read using OpenCV should be converted to an input blob ( like Caffe ) so that it can be fed to the network. This is done using the blobFromImage function which converts the image from OpenCV format to Caffe blob format. The parameters are to be provided in the blobFromImage function. First we normalize the pixel values to be in (0,1). Then we specify the dimensions of the image. Next, the Mean value to be subtracted, which is (0,0,0). There is no need to swap the R and B channels since both OpenCV and Caffe use BGR format.

Once the image is passed to the model, the predictions can be made using a single line of code. The forward method for the DNN class in OpenCV makes a forward pass through the network which is just another way of saying it is making a prediction.

The output is a 4D matrix :

We check whether each keypoint is present in the image or not. We get the location of the keypoint by finding the maxima of the confidence map of that keypoint. We also use a threshold to reduce false detections.

Once the keypoints are detected, we just plot them on the image. 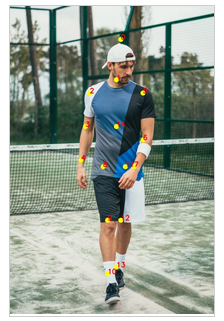 Widget not in any sidebars

Since we know the indices of the points before-hand, we can draw the skeleton when we have the key points by just joining the pairs. This is done using the code given below. 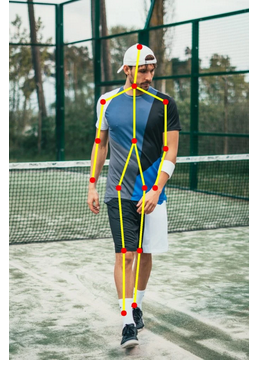