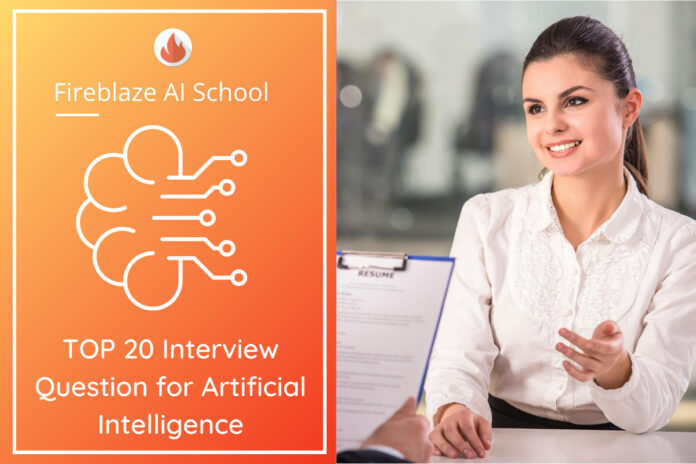 This post is details about important Interview Question for Artificial Intelligence. This is Helpful for freshers as well experience people. We will explain each question in a detailed answer. The following question are mostly asked by the interviewer, that’s make you confident.

Now a days every industries moved to words the automation with help Artificial Intelligence is a positively beneficial for market. In this post covered the most important interview questions and answers.

Answer: It is branch of computer science that have ability, think and react to do work look like humans.

According to the father of artificial Intelligence, john McCarthy,

It is “The science and engineering of making intelligent machines, especially intelligent computer programs”. Also, intelligence can distinguish us from everything in the world.

Question 3: What are the types of AI?

Answer: There are two types

It works with the real intelligence artificially. Strong AI is related to that machine can be made sentient.

There are two types of strong AI:

As a result, it does not create human-level intelligence in machines is possible.

Question 5: What is prolog in AI?

Question 6: Which programming language is used for AI?

Question 7: What are the advantages and disadvantages of AI?

Question 8: What is a Turing test?

Answer: The Turing test is a method to test a machine’s ability to match the human-level intelligence. A machine is used to challenge human intelligence, and when it passes the test it is considered intelligent. Yet a machine could be viewed as intelligent without sufficiently knowing how to mimic a human.

It means after some days computer to mimic a human.

AI can understand the task whatever assigned by users and it perform very well as per application. Also, improve skills that played a significant role in our evolution. It study on several domain such as computer science, modeling and simulation, Ethics, Linguistics, Logic, Mathematics, Statistics, Physics, Philosophy, Psychology and much more.

It can be used in the mechanical industry, IT, telecommunication industry, and many more.


Question 10: What is Deep Learning?

Deep learning is a subset of machine learning. Why name implies as deep learning Because it refers to using multi-layered neural networks to process the data.

Deep learning perform tasks like object detection, text-to-speech or speech-to-text, through exposure to these vast amounts of data for continual improvement in the ability to recognize and process information. Layers of neural networks stacked on top of each for use in deep learning are called deep neural networks.

Question 11: What is the Bayesian Network?

Answer: The Bayesian network is related to a statistical model that represents a set of variables and their conditional probabilities.

Bayesian Networks can predict the likelihood that any one of several possible known causes the contributing factor. This concepts develop the Naive Bayes algorithm.

Naive Bayes Machine Learning algorithm is a powerful algorithm for predictive modeling. It is a set of algorithms with a common principle based on Bayes Theorem. The fundamental Naive Bayes assumption is that each feature makes an independent and equal contribution to the outcome.

Question 13: What is the meaning of a framework?

Answer: Frames are a variant of semantic networks which is one of the popular ways of presenting non-procedural knowledge in an expert system. A frame which is an artificial data structure is used to divide knowledge into substructure by representing “stereotyped situations’.

Question 15: A* algorithm based on which search method.

Answer: A* is a computer algorithm that is extensively used for the purpose of finding the path or traversing a graph in order to find the most optimal route between various points called the nodes.

Question 16: What is the neural network in artificial intelligence?

Answer: The Neural network concept comes under a biological neural system, which receives the data, like the brain and process the data and gives output based on application. It means your brain works as an algorithm to produce a output based on input or user activity.

For example:- supposed your body has to be pain then your brain take action .

Question 17: In ‘artificial intelligence’ where you can use the Bayes rule?

Answer: In AI answer should be in the probabilistic condition on one piece of evidence, that time Bayes rule can be used.

i.e. those have maximum probability of given class that assign the best one.

Question 18: What is a fuzzy logic?

Answer:   It is work on of encoding the code of human learning for artificial processing. It is a form of many-valued logic. It is represented as the IF-THEN rules.

Question 19: Which are those algorithms that are mostly used in AI?

Answer: A certain number of algorithms are mostly used, such as