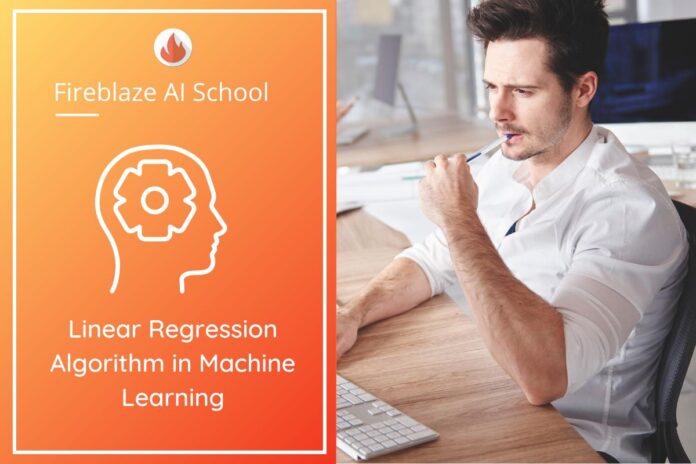 In machine learning, The Linear Regression Algorithm in Machine Learning is a supervised learning technique to approximate the mapping function to get the best predictions. Supervised learning is a technique in which we teach or train the machine using data that is well labeled which is the input and output variables using an algorithm to predict the outcome.

Regression is one of the Supervised learning category where the result is predicted by the use of known parameters that are correlated with the output. Regression is used to predict values within a continuous range value rather than trying to classify them into different categories. The known parameters are used to make a continuous and constant slope which is used to predict the unknown or the result. It tries to draw the best fit line from the data gathered from a number of points, It is also used to predict the relationship between a dependent variable and independent variables

For example, if you want to predict the speed of a car given the distance, predict the salary of the person according to the years of experience, it is a Regression problem.

The relationship between the two variables is said to be deterministic if one variable can be accurately expressed by the other. Eg: Degree Celsius and Fahrenheit.

The core idea is to obtain a line that best fits the data. The best fit line is the one for which total prediction error (all data points) are as small as possible. Error is the distance between the point of the regression line.

Simple linear regression is an approach for predicting a quantitative response using a single feature (or “predictor” or “input variable”). It takes the following form called a Linear Regression Equation:

β0 is the intercept:- If the model does not include x=0, then the prediction will become meaningless with only β0. For example, we have a dataset that relates years of experience(x) and Salary(y). Taking x=0 (that is Experience as 0), will make the equation have only b0 value which is completely meaningless as in real-time Experience and Salary can never be zero. This resulted due to considering the model values beyond its scope.

If the linear regression model includes value 0, then ‘b0’ will be the average of all predicted values when x=0. But, setting zero for all the predictor variables is often impossible.

The value of β0 guarantees that the residual will have mean zero. If there is no β0 term, then the regression will be forced to pass over the origin of the graph. Both the model coefficient and prediction will be biased.

β1 is the Multiplier / Unit change in x:-

If the value of β1  is greater than zero (β1 > 0) then the independent and dependant variable has positive relation it means an increase in x will increase y.

If the value of β1  is less than zero (β1 < 0) then the independent and dependant variable has negative relation it means an increase in x will decrease y.

How to calculate the model coefficient

The following are the formulas to calculate the linear model coefficient.

Estimating(Learning) Model Coefficients: Generally speaking, coefficients are estimated using the least squares criterion, which means we find the line (mathematically) which minimizes the sum of squared residuals (or “sum of squared errors”)

Linear Regression Line: While doing linear regression our objective is to fit a line through the distribution which is nearest to most of the points. Hence reducing the distance (error term) of data points from the fitted line.

MAE – This is mean absolute error. It is robust against the effect of outliers. Using the previous example, the resultant MAE would be (30-10) = 20

MSE – This is mean squared error. It tends to amplify the impact of outliers on the model’s accuracy. For example, suppose the actual y is 10 and predictive y is 30, the resultant MSE would be (30-10)² = 400.

RMSE – This is the root mean square error. It is interpreted as how far on average, the residuals are from zero. It nullifies the squared effect of MSE by square root and provides the result in original units as data. Here, the resultant RMSE would be √(30-10)² = 20. Don’t get baffled when you see the same value of MAE and RMSE. Usually, we calculate these numbers after summing overall values (actual – predicted) from the data

It suggests the proportion of variation in Y which can be explained with the independent variables.

Explained variation is the sum of the squared of the differences between each predicted y-value and the mean of y.

Unexplained variation is the sum of the squared of the differences between the y value of each ordered pair and each corresponding predicted y-value.

Total variation about a regression line is the sum of the squares of the differences between the y-value of each ordered pair and the mean of y.

We used the Advertising dataset to test the assumption of linear regression. Link of data set. In this dataset contain a TV, Radio, Newspaper Advertising investment, and according to their sale. 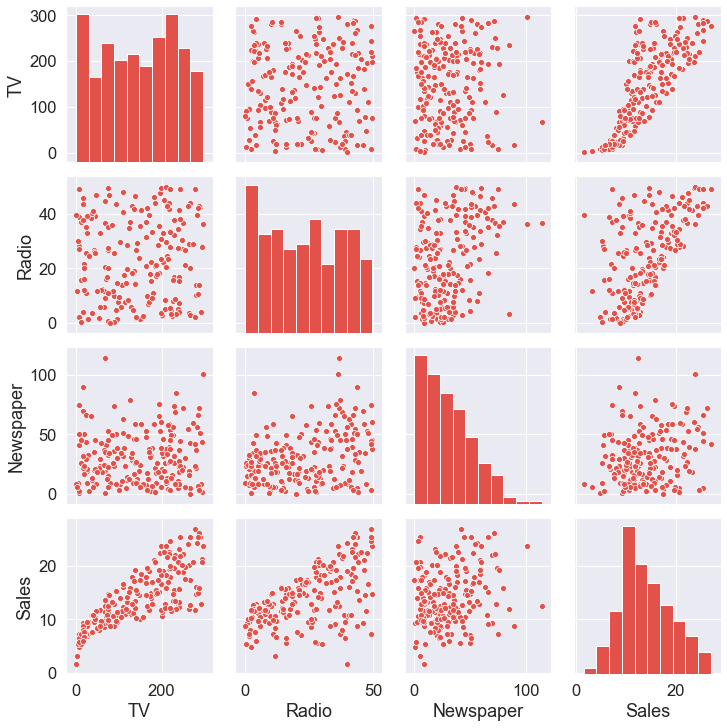 Conclusion:- In this blog, you will get a better understanding of the regression part of supervised machine learning and working of linear regression and their implementation.