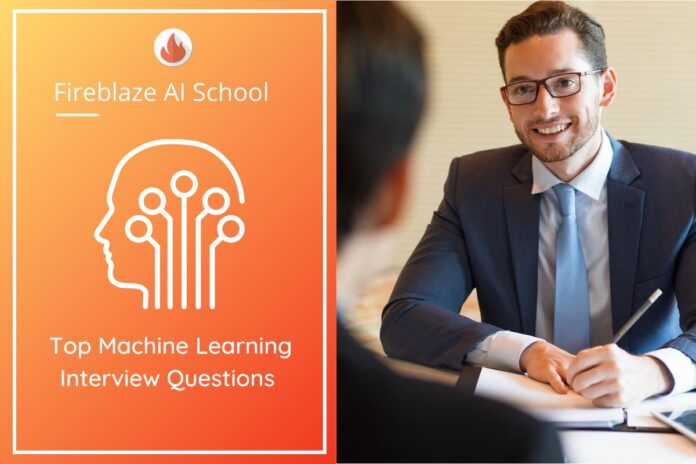 In this article we are going to discuss about top Machine Learning Interview Questions and their answers which can help you to crack next machine learning interview.

Q1. What are the different types of machine learning?

This is most important question in this Machine Learning Interview Questions answer series.

Regression and classification type of problem solve by Supervised learning

Unsupervised learning uses unlabeled data, it means we don’t know the exact output of the machine learning model and allow the model to act on that information without guidance. Create a cluster of our data according to their feature similarities

Reinforcement Learning is a part of Machine learning where an agent is put in an environment and he learns to behave in this environment by performing certain actions and observing the rewards which it gets from those actions.

Q3. What is the confusion matrix?

Q4. Which is more important to you – model accuracy or model performance?

Q7. What is the difference between Gini Impurity and Entropy in a Decision Tree?

Entropy is used to calculate randomness in data using this we find the information gain and whichever parameter is higher the importation is our root note a parameter.

Gini measurement is the probability of a random sample variable that also be used to select the root smallest value or Gini is considered as the root note.

Q8. What is the difference between Entropy and Information Gain?

Entropy is just about the randomness in data. It decreases as you reach closer to the leaf node.

Information gain is used to reduce entropy of each attribute is also used to split out the dataset attribute, higher the values of information gain consider as the root node.

Q9. What is Overfitting? And how do you ensure you’re not overfitting with a model?

Overfitting occurs when a model highly train on training data but get a negative influence on testing data.

Use the ensemble methods such as random forest which reduces the variance in data by using a bagging method like uses multiple decision trees and combining their result.

when two independent variables (e.g., x1 and x2) in a multiple regression have some correlation then there is collinearity occurs.

when more than two independent variables (e.g., x1, x2, and x3) are inter-correlated with each other then Multicollinearity occurs.

Q12. What is bagging and boosting in Machine Learning?

Bagging tries to implement similar learners on small sample populations and then takes a mean of all the predictions.

In general, bagging you can use different learners on different populations. This helps us to reduce the variance error

Boosting is an iterative technique that adjusts the weight of an observation based on the last classification.

If an observation was classified incorrectly it tries to increase the weight of this observation and vice versa.

Q13. What do you understand by Precision and Recall?

Precision: When it predicts yes, how often is it correct?

True Positive Rate: When it’s actually yes, how often does it predict yes?

Also known as “Sensitivity” or “Recall”

Q14. What is ROC curve and what does it represent?

Q15. What is difference between R Square and R adjacent?

Coefficient of Determination (R Square) It suggests the proportion of variation in Y which can be explained with the independent variables. Mathematically:

n = Number Of points in dataset

p = Number of independent variable in the model

If the values of a column or feature is correlated with values of that same column then it is said to be autocorrelated, In other words, Correlation within a column.

Durbin-Watson(DW) Test is Generally used to check the Autocorrelation.

Hyperparameter:- A model hyperparameter is a configuration that is external to the model and whose value cannot be estimated from data. They are often used in processes to help estimate model parameters. They are often specified by the practitioner. They can often be set using heuristics. They are often tuned for a given predictive modeling problem

Q20. Suppose you found that your model is suffering from low bias and high variance. Which algorithm you think could handle this situation and Why?

The data is suffering from low bias and high variance means the model is Overfitting.

Bagging method has created a subset of data and build multiple decision trees to solve a particular problem, in classification type of problem get the prediction as majority of the class and the regression problem averaging the regression.

In this article we discussed about top most important Machine Learning Interview Questions and their answers. Hope this will help you to prepare for next machine learning interview.