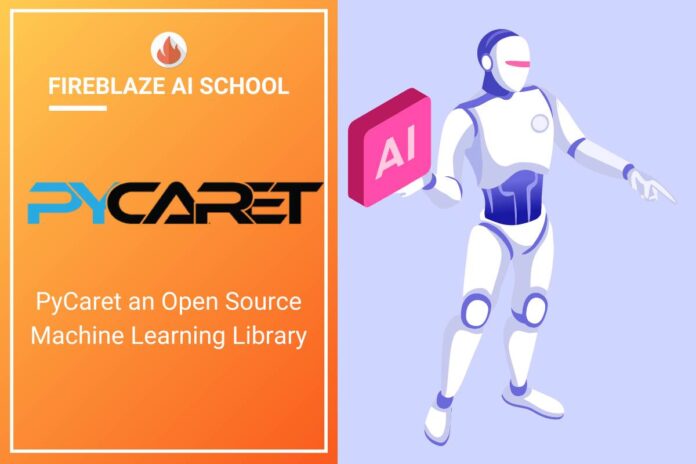 PyCaret is an open-source, low-code machine learning library in Python that aims to reduce the cycle time from hypothesis to insights. It is well suited for seasoned data scientists who want to increase the productivity of their ML experiments by using PyCaret in their workflows or for citizen data scientists and those new to data science with little or no background in coding. PyCaret allows you to go from preparing your data to deploying your model within seconds using your choice of notebook environment. Please choose your track below to continue learning more about PyCaret.

Installing PyCaret is the first step towards building your first machine learning model in PyCaret. Installation is easy and takes only a few minutes. All dependencies are also installed with PyCaret.

Run the below command to install PyCaret.

#installing for the first time

Note:- that in order to avoid potential conflicts with other packages it is strongly recommended to use a virtual environment, e.g. python3 virtualenv

PyCaret is a deployment-ready Python library which means that as you perform an experiment, all steps are automatically saved in a pipeline which can be deployed into production with ease. PyCaret automatically orchestrates all dependencies in a pipeline. Once a pipeline is developed, it can be transferred to another environment to run at scale.

In this tutorial we will learn:

The first step to getting started with PyCaret is to install pycaret. Installation is easy and will only take a few minutes. Follow the instructions below:

If you are running this notebook on Google colab, run the following code at top of your notebook to display interactive visuals.

Overview of the Classification Module in PyCaret

PyCaret’s classification module (pycaret.classification) is a supervised machine learning module that is used for classifying the elements into a binary group based on various techniques and algorithms. Some common use cases of classification problems include predicting fraud customers (yes or no), predicting the sex (M or F).

Dataset for the Tutorial

For this tutorial, we will use a dataset from Kaggle called Titanic Datasets Titanic: Machine Learning from Disaster

Start here! Predict survival on the Titanic and get familiar with ML basics.

The sinking of the Titanic is one of the most infamous shipwrecks in history.

On April 15, 1912, during her maiden voyage, the widely considered “unsinkable” RMS Titanic sank after colliding with an iceberg. Unfortunately, there weren’t enough lifeboats for everyone on board, resulting in the death of 1502 out of 2224 passengers and crew.

While there was some element of luck involved in surviving, it seems some groups of people were more likely to survive than others.

Short descriptions of each column are as follows:

age: Age is fractional if less than 1. If the age is estimated, is it in the form of xx.5

sibsp: The dataset defines family relations in this way…

parch: The dataset defines family relations in this way…

Some children traveled only with a nanny, therefore parch=0 for them.

Setting up Environment in PyCaret

The setup() function initializes the environment in pycaret and creates the transformation pipeline to prepare the data for modeling and deployment. setup() must be called before executing any other function in pycaret. It takes two mandatory parameters: a pandas data frame and the name of the target column. All other parameters are optional and are used to customize the pre-processing pipeline (we will see them in later tutorials).

When setup() is executed, PyCaret’s inference algorithm will automatically infer the data types for all features based on certain properties. The data type should be inferred correctly but this is not always the case. To account for this, PyCaret displays a table containing the features and their inferred data types after setup() is executed. If all of the data types are correctly identified enter can be pressed to continue or quit can be typed to end the experiment. Ensuring that the data types are correct is of fundamental importance in PyCaret as it automatically performs a few pre-processing tasks which are imperative to any machine learning experiment. These tasks are performed differently for each data type which means it is very important for them to be correctly configured.

In later tutorials, we will learn how to overwrite PyCaret’s inferred data type using the numeric_features and categorical_features parameters in setup().

The majority of these features are out of scope for the purposes of this tutorial however a few important things to note at this stage include:

1 Target Type: Binary. The Target type is automatically detected and shown. There is no difference in how the experiment is performed for Binary or Multiclass problems. All functionalities are identical.

8 Transformed Test Set: (268, 1051) Displays the shape of the transformed test/hold-out set. This split is based on the default value of 70/30 that can be changed using the train_size parameter in setup.

Now compare the machine learning model with a single line. 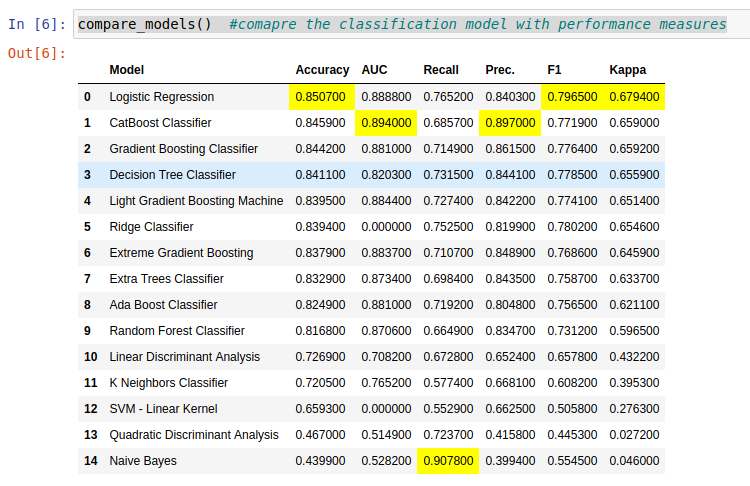 Two simple words of code (not even a line) have created over 15 models using 10 fold stratified cross-validation and evaluated the 6 most commonly used classification metrics (Accuracy, AUC, Recall, Precision, F1, Kappa). The score grid printed above highlights the highest performing metric for comparison purposes only. The grid by default is sorted using ‘Accuracy’ (highest to lowest) which can be changed by passing the sort parameter. For example, compare_models(sort = ‘Recall’) will sort the grid by Recall instead of Accuracy. If you want to change the fold parameter from the default value of 10 to a different value then you can use the fold parameter. For example compare_models(fold = 5) will compare all models on 5 fold cross-validation. Reducing the number of folds will improve the training time.

While compare_models() is a powerful function and often a starting point in any experiment, it does not return any trained models. PyCaret’s recommended experiment workflow is to use compare_models() right after setup to evaluate top-performing models and finalize a few candidates for continued experimentation. As such, the function that actually allows to you create a model is unimaginatively called create_model(). This function creates a model and scores it using stratified cross-validation. Similar to compare_models(), the output prints a scoring grid that shows Accuracy, AUC, Recall, Precision, F1, and Kappa by fold.

For the remaining part of this tutorial, we will work with the below models as our candidate models. 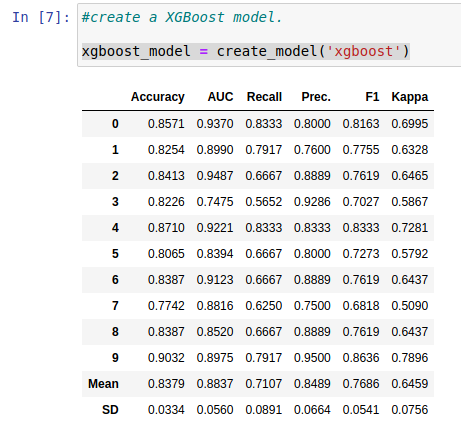 #tuned model object is stored in the variable ‘tune_adaboost_model’.

The tune_model() function is a random grid search of hyperparameters over a pre-defined search space. By default, it is set to optimize Accuracy but this can be changed using optimize parameter. For example: tune_model(‘dt’, optimize = ‘AUC’) will search for the hyperparameters of a Decision Tree Classifier that results in highest AUC. For the purposes of this example, we have used the default metric Accuracy for the sake of simplicity only. Generally, when the dataset is imbalanced (such as the credit dataset we are working with) Accuracy is not a good metric for consideration.

Before model finalization, the plot_model() function can be used to analyze the performance across different aspects such as AUC, confusion_matrix, decision boundary etc. This function takes a trained model object and returns a plot based on the test / hold-out set.

There are 15 different plots available, please see the plot_model() docstring for the list of available plots.

In this article, we are learning new AutoML technology. With a line of code how it performs with all algorithm. This library best for a senior data scientists.Everything is automated and result with all parameters.