Random forest is a supervised learning algorithm. The “forest” it builds on multiple decision trees the process is known as the “bagging” method. The idea behind the bagging method is that a combination of learning models increases the overall result of the model.

The structure of the Random forest is look like below.

The problem statement is that looking to buy a house, but you’re unable to decide which one to buy. For this reason, you visit the agent and give you the list of parameters that will help you to consider before buying a house. The list of parameters are:- House Price, Number of bedrooms, parking space, locality, available facilities.

Now earlies said that RAndom forest is formed multiple decision tree it randomly selected the set of parameters for each different decision tree. 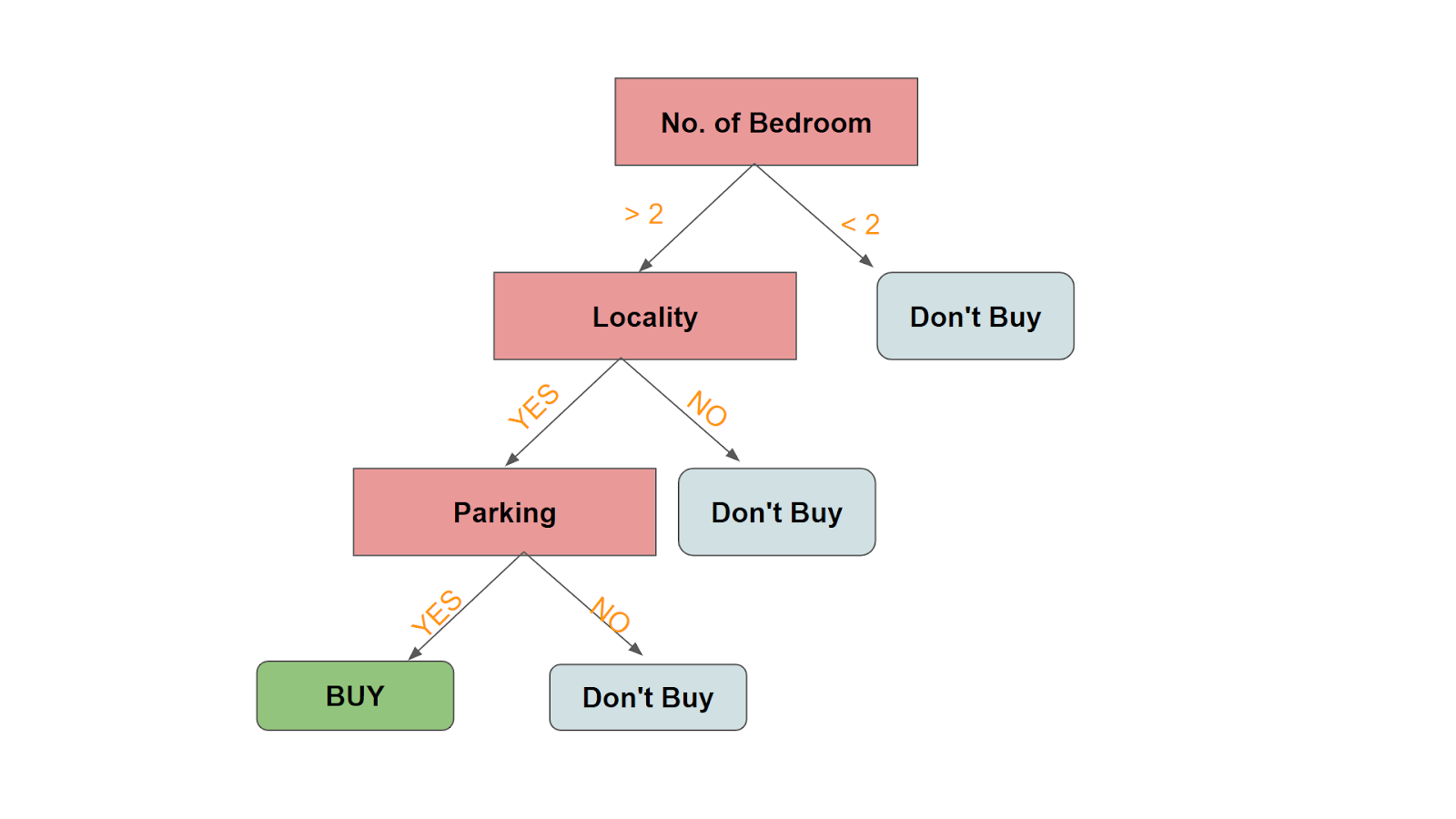 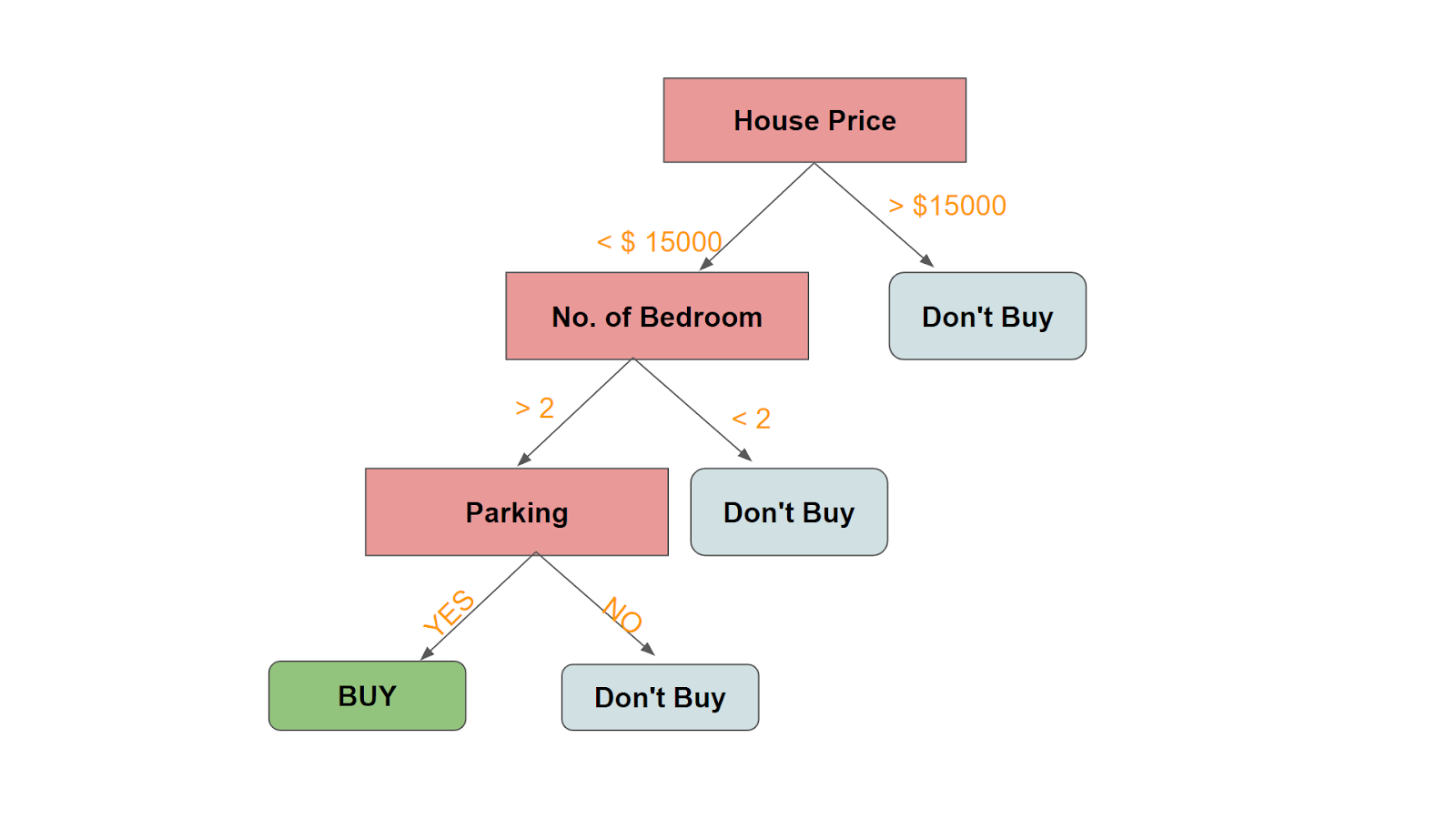 Here we have created multiple decision trees i.e. 3 With using given 3 parameters in the dataset. Each decision tree predicts some output from data a variable and we get the aggregate of that value to predict the outcome in the random forest.

In Simple words after building the model of the random forest it to get the prediction to take majority value in case of classification and aggregate in case of regression.

So this is also a difference between Decision tree and Random Forest.

Why use random Forest?

When we are building a decision tree model there is only one tree that is from on the basis of training data the tree measures all are the training parameter but in case new data is come then accuracy getting very low.

This is because of the happening due to overfitting.

Overfitting:- overfitting happens when our model captures the noise along with the underlying pattern in data. It happens when we train our model a lot over noisy datasets so the accuracy of training data is high but the testing phase it’s very low. These models have low bias and high variance.

This problem can be solved by using the random forest because it works on different data trees in the dataset.

The Mathematics Behind Random Forest

Method to split out the data is the Gini index, it checks the impurity or purity of data it is used in the CART( Classification and Regression Tree) algorithm like Decision Tree.

Formula to calculate Gini index is:-

Information gain is calculated with the use of entropy in the data set and the attribute entropy, It gives us information about how much information a feature provides us with a class.

Entropy measures the impurity or randomness is present in the given data. It is used to decide the root node in the decision tree to split out the data.

Random Forest Algorithm to solve regression problems that time you are using the mean squared error (MSE) value to how your data branches from each node.

Here are what the columns represent:

* credit.policy: 1 if the customer meets the credit underwriting criteria of LendingClub.com, and 0 otherwise.

* int.rate: The interest rate of the loan, as a proportion (a rate of 11% would be stored as 0.11). Borrowers judged by LendingClub.com to be riskier are assigned higher interest rates.

* installment: The monthly installments owed by the borrower if the loan is funded.

* log.annual.inc: The natural log of the self-reported annual income of the borrower.

* dti: The debt-to-income ratio of the borrower (amount of debt divided by annual income).

* fico: The FICO credit score of the borrower.

* days.with.cr.line: The number of days the borrower has had a credit line.

* revol.bal: The borrower’s revolving balance (amount unpaid at the end of the credit card billing cycle).

* inq.last.6mths: The borrower’s number of inquiries by creditors in the last 6 months.

* delinq.2yrs: The number of times the borrower had been 30+ days past due on a payment in the past 2 years.

We aim to meet the growing demand for talent in the field of Data Science, ML and AI by empowering students and working professionals to develop relevant competencies & accelerate their career progression.
Contact us: blogs@fireblazeaischool.in
© All Rights Reserved @Fireblaze Technologies Pvt. Ltd
MORE STORIES