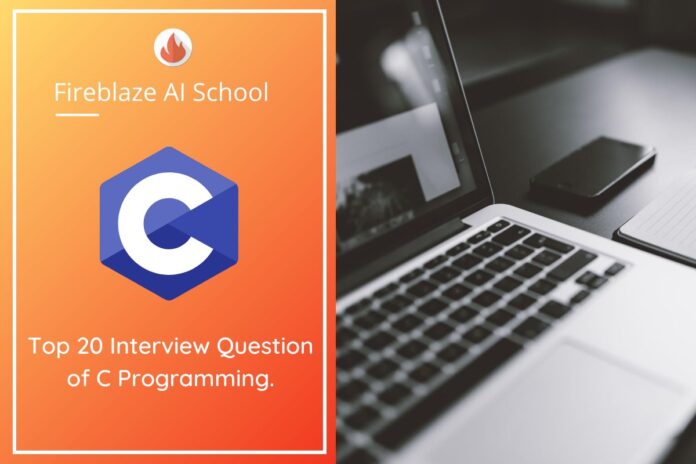 In this article we are going to discuss about top Interview Question of C Programming which can be helpful for your next interview.

Q1. How can we store a negative integer?

Q3. Is it possible to run the C program in the absence of a main()?

Ans: The program will be compiled but will not be executed. To execute any C program, main() is required.

Q4. What is a Nested Structure?


Q6. What is Preprocessor?

Ans: A Preprocessor Directive is taken as a built-in defined function or macro that acts as a directive to the compiler, and it gets executed before the actual C Program is implemented.

Q7. Why is C called the base of all Languages?

Ans: C having many core concepts and data structures like arrays, lists, functions, strings, etc. Many languages designed after C are designed based on C Language. Hence, it is considered as the base of all languages.

Q8.What do you mean by Dangling Pointer Variable in C Programming?

Ans: A Pointer in C Programming is used to point the location of the memory of an actual variable. In case if that particular variable is deleted and the Pointer is still looking to the same memory location, then that appropriate pointer variable is called as a Dangling Pointer Variable.

Ans: The scope of the variable can be specified as part of the code area where the variables listed in the program can be obtained directly. In C, all identifiers are lexically (or statically) scoped.

Q10. What are static variables and functions?

Ans: The variables and functions that are represented using the keyword Static are recognized as Static Variable and Static Functions. The variables declared using Static keyword will have their scope limited to the function in which they are listed.

Q11. Differentiate between calloc() and malloc()

Ans: calloc() and malloc() are memory active memory allotting functions. The only difference between them is that calloc() will load all the allocated memory locations with value 0 but malloc() will not.

Q12. What are the actual places where the programmer can apply Break Control Statement?


Q13. How is a Function named in C Language?

Ans: Function can be declared as follows:

Q14. What is Dynamic Memory allocation? Mention the syntax.

Q15. What is the propose of  Dangling Pointer Variable in C Programming?

Ans: We cannot do & on constants and on a variable that is represented using the file storage class.

Q17. What is the difference between declaring a header file with < > and ” “?

Q18. When should we use the register storage specifier?

Ans: We use Register Storage Specifier if a particular variable is used very frequently. This helps the compiler to locate the variable as the variable will be submitted in one of the CPU registers.

Ans: x++; is the most efficient description as it just a single direction to the compiler while the other is not.

Q20. Which variable can be used to access Union data members if the Union variable is represented as a pointer variable?

Ans: Arrow Operator( -> ) can be used to access the data parts of a Union if the Union Variable is represented as a pointer variable.