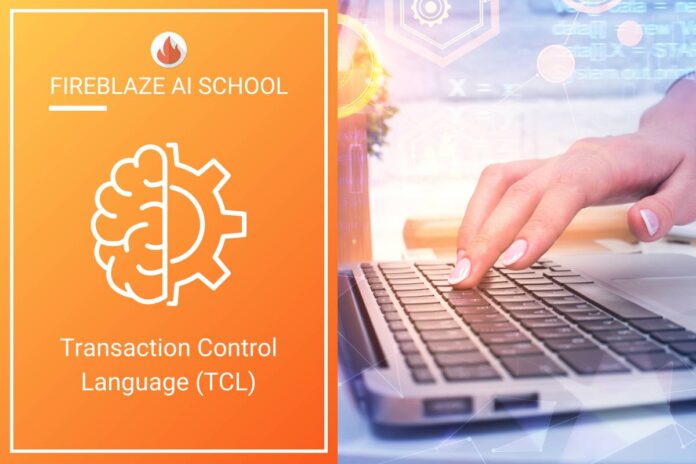 SQL stands for structured query language which is used to create, modify, retrieve, and store the data in the relational database.

Transaction Control Language(TCL) commands are manage transactions in the database. These are managed the changes made to the data in a table by DML statements. It also allows statements to be grouped commonly into logical transactions. Read on Resume Building Guide for Data Scientists

There are some commands of TCL in SQL

With the help of these commands in SQL, we can easily control the database structure.

COMMIT: Commit command is used to permanently store or save any transaction into the database.

ROLLBACK: This command restores the database to last committed point It is also used with savepoint command to jump to a savepoint with its name in a transaction.

SAVEPOINT: Savepoint command is used to temporarily save a transaction with a savepoint name that you can rollback to that point whenever necessary.

COMMIT command is used to permanently store or save any transaction into the database.

To avoid that, we use the COMMIT command to identify the changes as permanent.

Create a table student and commit the session.

SAVEPOINT command is used to tentatively save a transaction so that you can rollback to that point whenever needed.

Using this command we can name the various states of our data in any table and then rollback to that state using the ROLLBACK command whenever needed.

Update the name of the student name to ‘Rishikesh’ whose student id is 101 and save it temporarily.

This command returns the database to the last committed state. It is also used with the SAVEPOINT command to jump to a savepoint with its name in a current transaction.

Update the name of the student name to ‘Rishikesh’ whose student id is 101 and save it temporarily and then rollback the changes.

Here we rollback all the updated information which we update recently by using the name of savepoint and rollback command.

Now you can do the easy transactions on the database after reading this blog the example also helpful for you to create a procedure. Want to learn SQL? Visit our Website for more information.