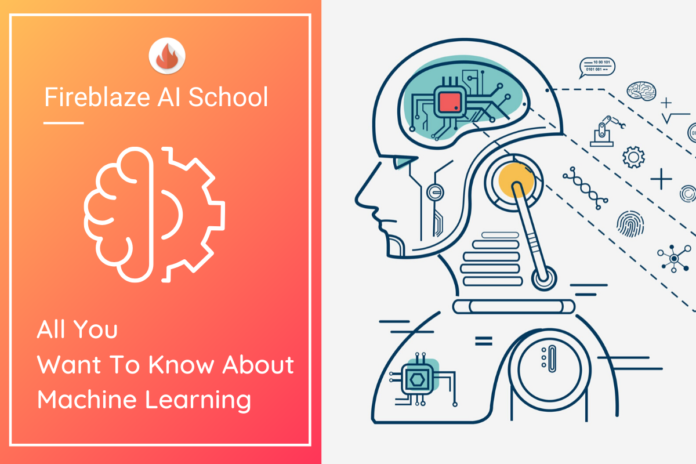 Before we start we have to know what is Machine Learning? It is the science of creating algorithms and program which learn on their own. Therefore It is a type of Artificial Intelligence (AI) that provides computers the ability to learn without being explicitly programmed.

We all use products or services based on ML in our day to day life such as Google search engine, ad placement, stock trading, computer vision, drug design, Face Detection – Facebook photo tagging, Span email detection, Recommendation system by E-commerce giants such as Amazon and eBay.

Every tech company is making use of these Algorithms to provide a perfect user-friendly experience and simultaneously multiply profits by increasing business.

The process involved in Machine Learning

Data is to be collected first ,it can be any in any form such as comma separated values(.csv), excel sheets, spread sheets, etc. (Note: It is not necessary in ML that the larger the data faster the learning.)

Data is not always in its best form, It needs to be cleaned, manipulated and wrangled so that model can be applied easily.The True and False or the yeses and the noes are to be converted in binary form i.e 0’s and 1’s. Exploratory analysis is one of the method of data clearing.

To evaluate if the model is precise and highly accurate we test the model on test data to check the precision and performance.

Error reduction and increasing accuracy by applying different model and on different variables of data .

It is also called as predictive model and is the most common type of learning. It is done on predefined rules. It is used when the output is definite. In simple words, it is used when the right type of training data is known ie labeled data.

It is also called as predictive model and is the most common type. This is done on predefined rules. It is used when the output is definite. In simple words, it is used when the right type of training data is known ie labeled data.

It is a mixture of both supervised and un-supervised. It makes use of un-labeled and labeled data for training. These algorithms can perform better when we have a very small amount of labeled points and a large amount of unlabeled points used in modeling.

It is a type of unsupervised learning which allows the machine to automatically learn its behavior from the previous output or feedback. The learning process keeps on adopting new results as time goes by. (Note: This method is to memory expensive to store every value.) Example problems: Self driving vehicles , Games such as Chess use this technique.

It is a statistical process or predictive modelling technique. It defines the relationship between dependent and independent variable. If one variable is used in regression then its is called simple regression if two or more than two variables are used then it is called as multiple regression. The most widely used regression algorithms are :

It is a type of supervised learning algorithm that is mostly used for classification problems. It fits for both Categorical and continuous dependent variables. In this algorithm, we group the set of variables into two or more homogeneous sets. Decision Trees are often accurate and very favorite algorithm in ML .The most widely used Decision Tree algorithms are :

It is a method of unsupervised learning. Clustering can be used to form groups of similar data. In simple words, It is the process of organizing objects into groups whose members are similar in some way. The most widely used Clustering algorithms are :

Clustering algorithm can be used for problems on classification and regression by applying Bayes theorem.It is easy to build and is usually used for very large data sets.
The most widely used Bayesian algorithms are :

It is used in Anti- Virus Software’s to improve the efficiency .

The clustering algorithm in ML is used in genetics to help find genes associated with a particular disease.

ML algorithm such as K-means clustering is used in video compression and de-noising techniques.