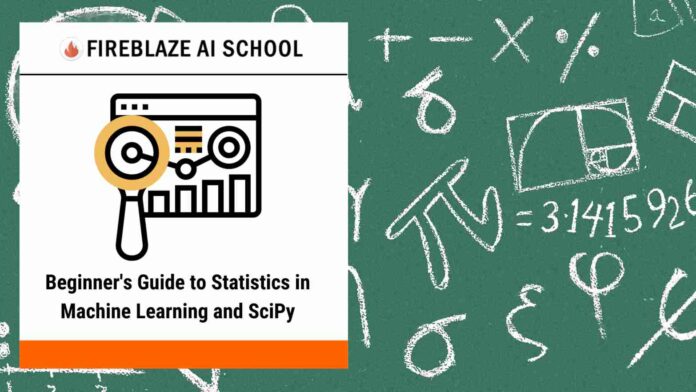 Introduction To Statistics in Machine Learning and SciPy

In this article we are going to discuss Statistics in Machine Learning and SciPy, Statistical Machine Learning has become a vital component in the journey to becoming a good Data Scientist. Statistics and other numerical concepts have become an indispensable aspect of Machine Learning. It provides cold, hard, quantitative facts about the data that is being analyzed. Correlations, patterns, covariance, distributions – all are essential to understand the features within your data. Knowing and understanding key statistical concepts is a must-have for anyone beginning their data science journey.

In this blog post, we will learn some important Statistics in Machine Learning and SciPy. We will also study an advanced computational package within Python called SciPy and how it is used to make the most out of raw data.

What is Statistics in Machine Learning and SciPy?

Statistics is a set of analytical methods and tools that help us to answer critical questions about raw data. It is a branch of mathematics used to visualize, analyze and interpret a large set of numbers or a huge sample of observations. In the scope of data science, it is divided into two categories:

Thus we come to realize that statistics and machine learning go hand in hand for a better understanding of data. Statistical concepts are essential for applied machine learning, as it aids us to select, evaluate and interpret predictive models.

Population: It is a set of resources from which we can acquire information. In other words, it is a group of interest or any group that a researcher wants to learn more about.

Sample: A subset of the population to garner inferential statistics and predict outcomes. It is nothing but a group of data drawn from the aforementioned population.

Variable: A variable can be a quantity, amount or feature that is a descriptive feature of the population.

Within descriptive statistics, we use certain statistical measures to locate a single score that is the most descriptive of all values in a given population. N here represents the entire population. Measures of central tendency include –

Mean – The arithmetic mean is the average of data at all points. It is computed as:

Median – When data is sorted in an ascending order, the median is calculated as the value that lies just in between of this sorted set.

Mode – The mode of a dataset represents that value that occurs most often or most frequently.

Range – Difference between the minimum and maximum value in a set of data. Useful when data is devoid of outliers.

Interquartile Range – The difference between the first quartile (Q1) and the third quartile (Q3).

Variance – Measurement of the average squared distance deviation from mean.

Standard deviation – Square root of variance. When data points are closer to mean, the SD is lower. It is always a positive value.

In statistics and probability, the bell-curve distribution is a popular continuous probability distribution for any arbitrary variable. It is also called Gaussian/ Normal distribution. It focuses on two statistical metrics namely mean and standard deviation. A myriad of natural phenomena are normally distributed, like scores of people in an entrance examination, the height of the population, etc.

Hypothesis testing is a probability-based metric to understand decisions made on experimental data.

To determine the effectiveness of our hypothesis, we measure it by using p-values. Some popular hypothesis tests include –

Just like the concept of Normal distributions is derived from common observations, the law of large numbers is another such naturally observed criterion purely based on numbers. This theorem states that as n (no. of observations) tends to ∞ –

In other words, the Law of Large Numbers (LLN) shows that the average of samples converges to the population/theoretical mean μ (with probability 1) as the sample size increases.

This is anonymous to saying that the more data we collect, the more the data is bound to represent the population respective to the problem domain.

We now realize how important computing and statistics are for data understanding and research. Sometimes datasets can be gigantic and the need arises to perform mathematical and statistical computations on it. Python has come up with the SciPy library to tackle advanced computational methods.

Why statistics is important for data science?

Any company dealing with big data needs their employees to understand the concepts to handle and make the most out of existing data. This is where the statistics and mathematical concepts prove their potential. Understanding data also means making better reports and graphs for future inferences. Some broad areas where statistics come into play in data science are –

In this article we discussed Beginner’s Guide to Statistics in Machine Learning and SciPy. Thus statistics is an indispensable element of machine learning. Through this article we have covered some most-sought after statistical metrics, although there are many more. We also learn about the SciPy package for complex mathematical computations.