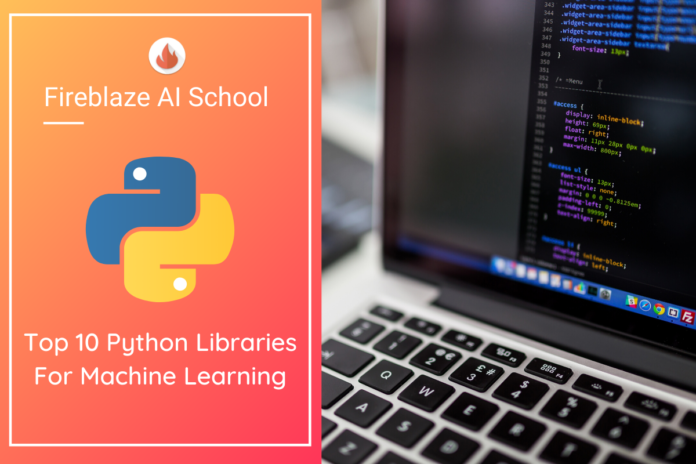 In this article, we are going to discuss the best Python Libraries For Machine Learning. First, we need to know what is machine learning? Machine learning (ML) is the study of computer algorithms that improve automatically through past data. It is a subset of Artificial Intelligence. Machine Learning is an application of artificial intelligence (AI) that can learn from the past and automatically learn and improve the accuracy/experience without being explicitly programmed.

Python is an open-source and offers the best platform for experimenting with these algorithms due to the readability and syntactical efficiency of the language, also python has the best libraries for machine learning.

The availability of ML libraries accessible to Python users makes it an even more attractive solution to interpret the immense amount of the data available today.

Following are the top 10 Python libraries that used in Machine Learning are:

Python has various libraries for machine learning. In machine learning problems/projects, a substantial amount of time is spent on data processioning as well as analyzing the data patterns. Pandas come handy as it was developed specifically for data preparation, analysis, and extraction.

Pandas is best Python library for machine learning because of providing high-performance and high-level, So is it easy to handle for data structure and data analysis.

Pandas is an open-source library that has a wide range of functionality such as data manipulation and analysis.

In other words, whenever you have a dataset in tabular (like excel sheet), you must be used the pandas for handling the data.

With the help of this library, you can read the CSV(Comma Separated Value), Excel, JSON(JavaScript Object Notation), and SQL(Structured Query Language) database. The good thing in pandas they have various inbuilt methods for combining data, filtering data, manipulation data, grouping data, and analyzing the data.

Remember it is not directly related to Machine Learning.

NumPy is a linear algebra developed in python programming. It comes with a function for dealing with complex mathematical operations like linear algebra, Fourier transform, random number, and features that work with matrices and arrays in Python. It performs statistical computations in Machine Learning. That’s why Numpy is the second most used Python Libraries For Machine Learning

David Cournapeau, father of the scikit-learn library. It was developed in 2007, during the Google Summer Code competition. This library public release in January 2010.

It can be interpenetrated with numeric and scientific libraries of Python like NumPy and SciPy. Scikit-learn library supports both machine learning methods such as supervised and unsupervised.

Scikit-Learn library is built on top of the NumPy, SciPy, and Matplotlilb libraries. Also, have a great tool for data mining and data analysis.

Another popular open-source library, is Sponsored project of NumFOCUS, a 501(c)(3) nonprofit charity in the US.

Matplotlib is one of those python libraries for machine learning that is used for Data Visualization. This library for two-dimensional(2D) plotting library for creating 2D graphs and plots. It provides various graphs such as Bar plot, Histograms, scatters plots, Box plots, and many more.

Plotly is an open-source python library. Plotly library supports over 40 unique charts with a wide range of scientific, statistical, financial, and 3D graphs.

Build on the top of the Plotly Javascript library. It also supports for non-web context including desktop editors (e.g. Spyder, PyCharm).

Seaborn library used for making a statistical graph in Python. It built on top of matplotlib library. Seaborn library is integrated with matplotlib and pandas data structures. Its dataset-oriented plotting functions operate on data frames and arrays containing whole datasets. It is mandatory

semantic and statistical aggregation to produce informative plots. Specialized support for using categorical variables to show observations statistics. It has an option for visualizing univariate or bivariate distributions.

Some of the good functionality that seaborn offers:

Behind the library, seaborn uses matplotlib to draw plots. Various tasks can be accomplished with only seaborn functions, but further customization might require using matplotlib directly.

As the name suggests, TensorFlow is a framework that involves defining, running computations and it derives from the operations that such as neural network perform on multidimensional arrays, which is referred to as tensors. TensorFlow is an open-source python library that is used for machine learning. TensorFlow provides a collection of workflows to develop and train models using Python, JavaScript, and easily deploy in the cloud, in the browser, or on-device no matter what language you use. It is a symbolic math library., and also used for machine learning application such as neural network, image recognition, handwritten digit classification, recurrent neural network, NLP(Natural Language Processing), word embedding.

Abstraction is the best feature of TensorFlow python when it comes to working with machine learning and AI projects.

First version 1.0.0 released on February 11, 2017, by Google Brain’s team. TensorFlow can run on multiple GPUs(e.g. NVIDIA) and CPUs. TensorFlow is available on 64-bit for all operating system such as Linux, macOS, Windows, and also supported to mobile computing platforms like Android and iOS.

The TensorFlow architecture is very flexible for all developers and easy to deploy at various platforms(CPUs, GPUs, TPUs).

Keras is a very popular open-source Machine Learning library for Python. It can run seamlessly on both CPU and GPU. This library for constructing neural networks and machine learning projects.

It can run on Deeplearning4j, MXNet, Microsoft Cognitive Toolkit (CNTK), Theano, or TensorFlow. It is very flexible and easy to add new modules just like adding new functions and classes.

Called as Natural Language Toolkit commonly NLTK, is libraries and programs for symbolic and statistical Natural Language Processing(NLP). NLTK is developed by Steven Bird and Edward Loper in 2001. NLTK is supported research and teaching in NLP and related to some close areas, linguistics, cognitive science, artificial intelligence, and machine learning.

It provides an easy-to-use interface to over 50 corpora and lexical resources.

NLTK is useful in many different industries like teaching, engineering, for students and researchers. NLTK is available on various platforms like Windows, Mac OS X, and Linux.

PyTorch is an open-source library that is based on the Torch library. When the first PyTorch is released it was released under the Modified BSD (Berkeley Software Distribution) license. PyTorch library implemented in C and wrapped in Lua. It was originally developed by Facebook’s AI Research Lab(FAIR), but is now used by Twitter, Salesforce, and many other major organizations and businesses. The most significant advantage of the PyTorch library is its ease of learning and use.

PyTorch also has a C++ interface.

PyTorch can smoothly integrate with the python, including NumPy. It is difficult to find a differnce between NumPy and PyTorch. PyTorch also allows developers to perform computations on Tensors.

Python is a powerful language for data science and machine learning and other various reason such as web development and many more.

Python is an open-source and active community that most of the developers create their own libraries for their own purpose and its release to the public(e.g. open-source).