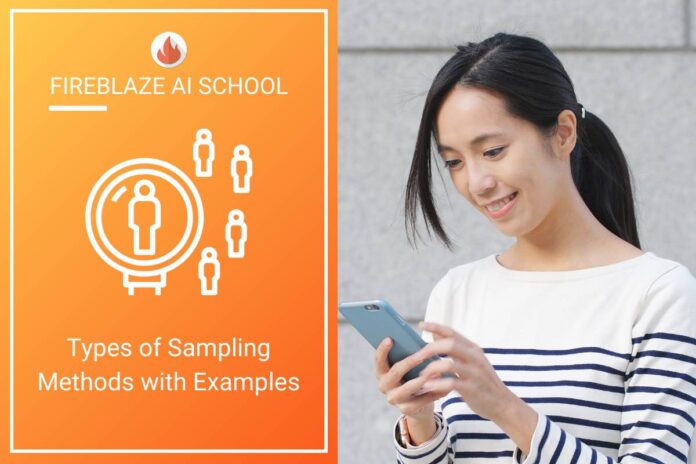 Introduction To Types Of Sampling

Sampling is a statistical procedure that is concerned with the selection of the individual observation. In sampling, we assume that samples are drawn from the population and sample means and population means are equal. A population can be defined as a whole that includes all items

Following Some terminologies are relevant to sampling:

There are two types

If you want to pick up some apples from the apple garden, the selected part will have the same characteristics. In this example, each member has a known chance of being selected in the sample.

In simple random sampling,the members are selected randomly and purely by chance.As every member has an equal chance of being selected in the sample, random selection of members does not affect the quality of the sample.it like lottery selection.

For Example:if a select member occurs after every 10th member,the Kth element becomes the 10th element.

Select the member in a systematic manner called as systematic sampling.kth element depends upon size of population.

Various segments of population are treated as clusters and members from each cluster selected randomly.it is similar to the stratified sampling but big difference is, in stratified sampling the population into homogeneous subgroups on the basis of similar characteristics i.e.age, sex, religion, etc.and in cluster sample does not divide the population into sub-groups but randomly selected from already existing.Each cluster may be more or less homogenous.

It is a type of sampling where the members for a sample are selected according to purpose of the study.

For Example,study of drug abuse on health.Every member of the society is not best responded for this study.Only  people who are addicted to drugs can be best respondents.

It is sampling where the members of the sample are selected on the basis of their convenient accessibility.

In data collection, every individual observation has equal probability to be selected into a sample. In random sampling, there should be no pattern when drawing a sample.

We have learned about sampling and its types.Sampling which is based on probability and non-probability mode.In this article covered all concepts related to sampling.