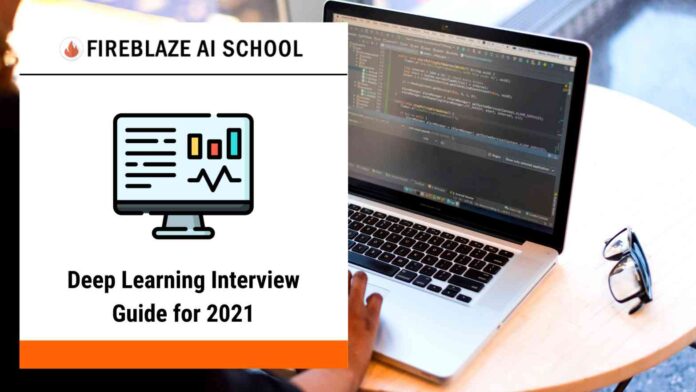 Deep learning is one of the most popular niches in the world of data science. With the rise of self-driving cars and smart speakers, companies these days are also on the lookout for data scientists who have a knack for deep learning. Here, we cover some basic questions that are maybe asked regarding

Hope you find this guide useful!

Q) What is the difference between deep learning and machine learning?

Machine Learning is a subset of Data Science. Here, statistics and algorithms are used to train machines with data. Machine learning uses algorithms to parse and study data in order to make informed decisions.

Deep Learning is a division of Machine Learning. It structures algorithms in layers to create an “artificial neural network” that can learn and eventually make intelligent decisions on its own.

The basic idea behind Deep Learning was to mimic the human brain i.e learning through a series of neural networks. With a larger amount of data and dimensions, Deep learning is preferred over ML.

Q) What is a neural network?

A neural network is a series of algorithms that attempts to identify underlying relationships and patterns in a large dataset. It replicates the working of a human brain. Neural networks typically consist of three layers –

Q) What is the role of weights and bias in a neural network?

Weights and biases are the learnable parameters of a deep learning model.

Weights control the strength between two simultaneous neurons. They are associated with a feature, convey the importance of that feature in predicting the output value. For instance, if the associated weight approaches 0, it has lesser importance in the prediction process.

Biases, which are constant, are an additional input into the next layer. However, bias is not influenced by the previous layer. It is simply an additional parameter used to tune the output along with the the weights of the input neurons.

When the inputs are transmitted between immediate neurons, the weights are applied to the inputs along with the bias. It can be denoted as –

Q) What is Perceptron? What is its role?

A single-layer perceptron is the fundamental unit of a neural network. It consists of input values, weights, bias, a weighted sum, and an activation function. It is a neural network unit that does certain computations to detect features or business intelligence in the input data. They are used for supervised learning as classifiers.

A perceptron uses data points that are readily labeled. The input data goes through an iterative loop to teach machines. This loop not only iterates but also evolves every time more data is fed to the machine. Thus, a perceptron algorithm improvises its output based on its findings each time so that after a period of time, the output data is more sophisticated and accurate.

Q) Explain the types of propagation in Deep Learning.

Forward propagation is the scenario where inputs are passed to the hidden layers with weights. At each layer, the output of the activation function is calculated until the next layer can be processed.

Backpropagation stands for backward propagation of errors. It is a technique to improve the performance of the network. It works backward from an error and updates the weights to reduce the error. Gradient descent is used here. The algorithm starts from the final cost function to minimize errors in each hidden layer. Weights and biases are tweaked here to decrease the overall cost function.

Q) What is the role of an activation function? Name a few types.

Some commonly used activation functions are –

Q) What are hyperparameters? How are they trained to be used in a neural network?

Q) What is Gradient Descent?

Gradient descent is an optimization algorithm that is used to minimize some function by repeatedly moving in the direction of steepest descent as specified by the negative of the gradient.

Gradient descent is calculated in the following manner –

Q) What is CNN? Explain the key layers behind it.

Q) What is Overfitting and Underfitting of a model? How can it be avoided?

Overfitting occurs when the model learns even the noise in training data. When a model is too overfit (i.e it trains using more noise than useful data), it adversely impacts its execution on new information. It is more likely to occur with nonlinear models that have more flexibility. Overfitting is one of the most commonly seen issues in deep learning. It can be detected when a model shows high variance and low bias.

Underfitting occurs in a model that is neither well-trained on data nor can conclude on new data. This usually happens when there is limited and unreliable data to train a model. In the case of underfitting, the model does not learn adequately and is incapable of predicting the right results. It results in poor performance and accuracy. Underfitting can be prevented by using more training data, adding dropouts, reducing the capacity of networks, and tuning the weights.

Recurrent Neural Networks (RNN) are neural networks that utilize the output from the preceding step and uses it as an input for the current step. In a recurrent neural network, the preceding outputs are crucial to deciding the next. It features a hidden layer that carries data in a sequence. This carried data can be used for training using the backpropagation algorithm. This type of ANN is said to be highly precise.

Q) What are the issues that concern implementation of RNNs?

Q) What is cost function and model capacity?

The cost function determines how well the neural network is performing with respect to the given training sample and the expected output. It largely depends on variables such as weights and biases. Additionally, it provides the performance of a neural network as a whole. In deep learning, our aim is to minimize the cost function. That’s why we prefer to use the concept of gradient descent which ensures just that

The model capacity of a deep learning neural network controls the scope of the types of mapping functions that it can learn. Higher model capacity signifies that the model can store and use more information to train.

Q) What are some supervised and unsupervised learning algorithms in Deep Learning?

So this sums up a basic questionnaire of the kinds of questions asked in a typical deep learning interview. Apart from this you need to learn about some important frameworks like TensorFlow, Keras and PyTorch. You must be aware about their features and at least have some basic projects in your portfolio implemented using these frameworks. You can also amplify your knowledge by learning about the unsupervised learning algorithms in deep learning.