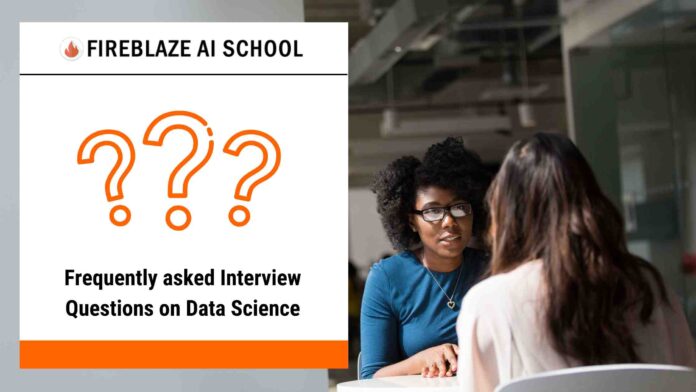 In this article we are going to discuss mostly asked Interview Questions on Data Science. Data scientists are seeing a huge rise in opportunities as more and more companies continue to leverage big data for data-driven business outcomes. They are in the forefront of this demand as it improves the way a business is able to handle customers, run operations and optimize their products. However, data science is a very vast field, and it may be increasingly tough to crack interviews. In addition to knowing various machine learning models, one must also be adept in advanced statistics and handling data.

Here, we have compiled some important questions in each data science domain. Hope this list helps you understand the kind of questions you can expect in an Interview Questions on Data Science.

Q) How to select metrics?

1. What kind of machine learning method is used – classification, regression, etc.
2. How is the target variable distributed?
3. Whether precision or recall needs to be achieved.

Q) What is a confusion matrix?

Confusion matrix is a technique used to determine the accuracy and performance of a classifier model. It is a 2×2 matrix that segregates outputs of a binary classifier. When run on the test data, the classifier model returns its own output. This is then compared with the actual values.

The following metrics can be derived from the values in a confusion matrix.

Q) What are p-values?

P-values are used to determine the accuracy of the hypothesis on which the model is based. P-value is between 0 and 1.

An ROC curve is a graph used to determine the accuracy of a classification model. It plots the true positive rate and the false positive rate. It is used to visualize the sensitivity of the classifier.

Q) Explain the different kinds of biases that occur.

Bias occurs when the sample data is not enough to properly study the population. In data science, we usually deal with the following biases –

Q) What is a normal distribution?

A normal distribution is derived from the notion that random variables are distributed in the form of a symmetrical, bell-shaped curve i.e data is distributed around a central value.

Characteristics of a normal distribution –

Whereas, recall is the proportion of relevant positives that were identified correctly.

F1 score is measured to balance the recall and the precision. A high F1 score indicates good precision and recall. i.e it indicates that there are low false positives and false negatives.

Q) Importance of covariance and correlation

Covariance and correlation are used to determine the relationship and degree of measure between two variables.

Covariance – It is a statistical tool used to indicate the relationship between the movement of two variables.

Data wrangling helps in making data useful by transforming it to make it compatible to the model. It is necessary because –

Q) What is cross-validation?

Q) What is an outlier? How can they be assessed?

An outlier is a data point that differs significantly from other observations. It may be due to variability in measurement or due to experimental error. Some ways to identify outliers are –

Outliers can be treated by –

Q) How to treat missing values?

Q) Explain model overfitting and underfitting? How to avoid it?

Overfitting is known to occur when a model is too complex, has too many parameters relative to the dependent variable. This model has poor predictive performance, as it overreacts to minor fluctuations in the training data.

Underfitting occurs when the model is unable to determine the relationship or trend in the underlying data. It leads to bad accuracy of the model.

One of the ways to combat overfitting and underfitting is to resample the data and use another training set for the model. It can be measure using k-fold cross-validation.

Linear regression – It is a statistical technique where a dependent variable is predicted from the score of another independent variable X. It assumes a linear relationship between two variables. Eg. Correlation between marks obtained by a student and the study hours.

Logistic regression – It is a logistical model used to predict a binary result based on the combination of dependent variables. The outcome here is binary, but there are multiple explanatory variables to generate the outcome. Eg. age, salary, gender, credit score etc. to determine whether a loan should be given to the customer or not.

SVM stands for support vector machine. It is a supervised machine learning algorithm that can be used to implement both regression and classification. It can solve linear and non-linear problems. The fundamental idea behind SVM is simple: The algorithm creates a line or a hyperplane which separates the data into classes.

Here, the thinner lines mark the distance from the classifier to the closest data points called the support vectors (data points that have a darker border). The distance between the two thin lines is called the margin.

Decision trees are a popular supervised learning model, used to classify labelled data. Each square above is called a node, and the more nodes you have, the more accurate your decision tree will be. It is a decision support tool that uses a tree-like model of decisions and their possible outcomes.

Entropy – Used to check homogeneity of a sample. If the sample is completely homogenous then entropy is 0 and if the sample can be equally divided it has an entropy of 1.

Information Gain – It is based on the decrease in entropy after a dataset is split on an attribute. While building nodes, we try to maximize the information gain.

Q) What is k-means clustering? How do you determine no. of clusters?

The elbow method is used to find the optimum number of clusters needed for developing the model.

Q) What is bias-variance trade-off?

The aim of any supervised machine learning algorithm is to have low bias and low variance to achieve good prediction performance. Bias is the error introduced due to oversimplification of sample. Variance occurs when the machine learning model is too complex resulting in overfitting.

For instance, the k-nearest neighbor algorithm has low bias and high variance. However, the trade-off can be changed by increasing the value of k which in turn increases the bias of the model.

So with the help of this guide on Interview Questions on Data Science, you are one step closer to obtaining the data scientist job of your dreams. Make sure you’re aware of the different kinds of machine learning models and also why and how they are implemented. Recommender systems (collaborative and content-based filtering), different kinds of classifiers like Random Forest are also vital to learn about. Make your portfolio strong by developing different ML techniques and stay ahead in the Data Science learning curve! In this article, we successfully discussed the most important Interview Questions on Data Science.