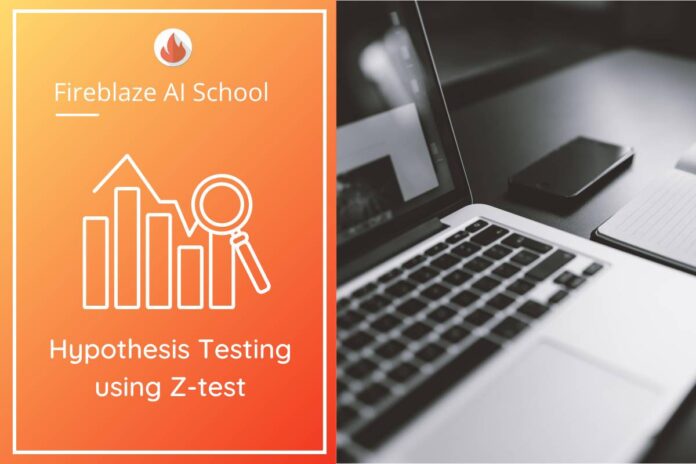 The current situation in pandemic due to coronavirus, all of the record has made a statistician. Now, the government and non-government sector constantly checking the numbers, making our own assumptions as per numbers. How the pandemic will play out, it calculates from the hypothesis. All fo these questions and assumptions can be solved by hypothesis testing. In this article, we are cover concepts of hypothesis testing and z-test.

Hypothesis testing is mathematical modeling for a testing claim or hypothesis about the parameters of interest in a given population set, using data measure form sample test.

A college student reports score an average of 7 out of 10 in the final semester. To test this “hypothesis”, record marks of say 30 students(sample) from the entire student(i.e. Students as a population now) of the college(i.e. say 300) and calculate that mean of the sample. After that compare the sample mean to the population mean and attempt to confirm the hypothesis.

The basic concepts of Hypothesis testing:

The null hypothesis is always the accepted fact. The meaning of “null” can be thought of as “no change”.

Examples of null hypotheses that are generally accepted as being true (i.e. Null Hypothesis):

The alternate hypothesis is just an alternative to the null(opposite to null). Also called a reject null hypothesis.

A Z-test is a type of hypothesis test. Hypothesis testing is just a figure out if results from a test are validated or repeatable.

For example, if someone said they had found a new drug that cures coronavirus, you would want to be sure it was probably true. A hypothesis test will tell you if it is probably true or false. A Z test, is used when your data is approximately

Different types of statistical test, you would use a Z test if:

We perform the One-Sample Z test when compare a sample mean with the population means.

For Example:  Let’s say we need to determine if boys on average score higher than 600 in the exam. We have the information that the standard deviation for boy’s scores is 100. So, we collect the data of 20 boys by using random samples and record their marks. Finally, we also set our ⍺ value (significance level) to be 0.05.

Mean Score for Girls is 641

The size of the sample is 20

The population mean is 600

Standard Deviation for Population is 100

we can reject the null hypothesis and conclude based on our result that boys on average scored higher than 600.

We perform a Two-Sample Z test when we want to compare the mean of two samples.

Here, let’s say we want to know if Boys on the average score of 10 marks more than the girls. We have the information that the standard deviation for boys Score is 100 and for girls, the score is 90. Then we collect the data of 20 girls and 20 boys by using random samples and record their marks. Finally, we also set our ⍺ value (significance level) to be 0.05.

we fail to reject the Null Hypothesis

You learn about when to use the z-test and how to calculate. Also, learn what is means by z-test and uses of z-test.Clear the all basic concept of hypothesis testing.